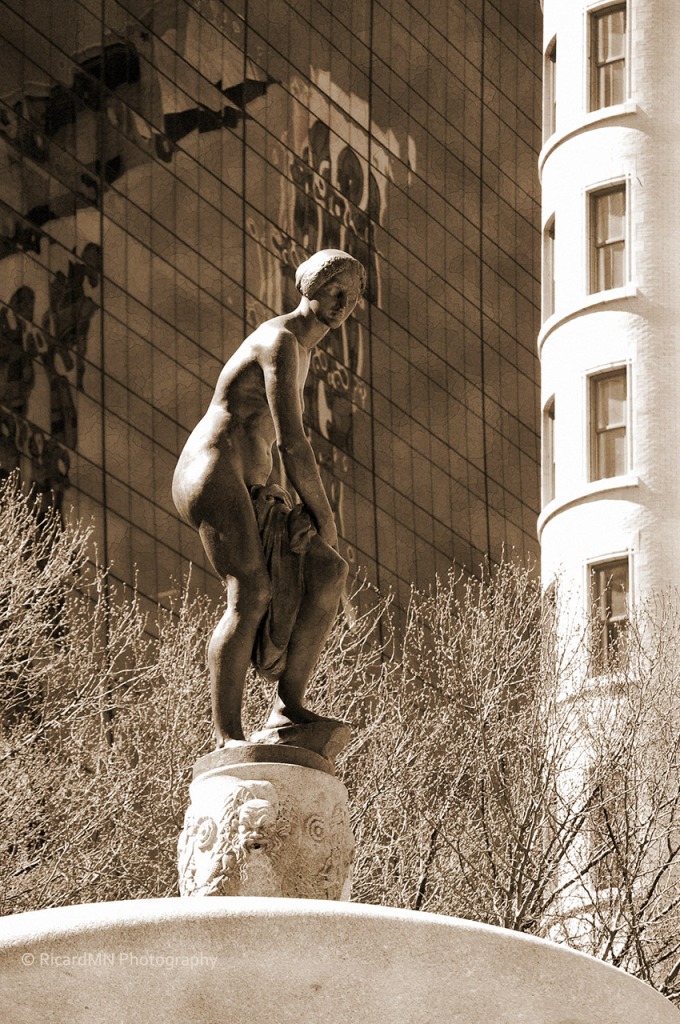 Pomona, atop the Pulitzer memorial fountain, in Grand Army Plaza, at the intersection of Central Park South and Fifth Avenue in front of the Plaza Hotel in Manhattan, New York City. It stretches from 60th to 58th Streets between East Drive and Fifth Avenue. “Pulitzer Fountain of Abundance” was contributed by publisher Joseph Pulitzer. It is topped with this bronze statue of the Roman goddess Pomona also designed by Bitter.

Pomona (Latin: Pōmōna) was a goddess of fruitful abundance in ancient Roman religion and myth. Her name comes from the Latin word pomum, “fruit,” specifically orchard fruit. She was said to be a wood nymph. In the myth narrated by Ovid she scorned the love of the woodland gods Silvanus and Picus, but married Vertumnus after he tricked her, disguised as an old woman. She and Vertumnus shared a festival held on August 13. Her priest was called the flamen Pomonalis. The pruning knife was her attribute. There is a grove that is sacred to her called the Pomonal, located not far from Ostia, the ancient port of Rome.

The woman behind Pomona was Audrey Munson. She was the model of many New York City statues such as on top of the Manhattan Municipal Building as Civic, Columbia at the Maine Memorial at Columbus Circle, the Manhattan Bridge and as a strong woman holding a dead fireman at the Fireman Memorial on Riverside Drive and West 100 Street. After she became a sought after model, her fame came to a tragic turn. After moving in a boarding house that belonged to a doctor, he felled in love with her. He killed his wife to marry her. Audrey fame faded afterward. She attempted suicide by swallowing mercury and was committed to a mental hospital for the rest of her life. She died there at the ripe old age of 105.